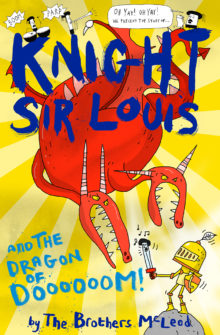 Knight Sir Louis and the Dragon of Doooooom!

‘I love these books so much! Mr Gum levels of weird and brilliant!’ Jo Nadin

‘Both of these books are stone cold smashers’ Stuart Heritage

Knight Sir Louis has defeated dragons, goblins and evil wizards but when he is sent to do battle with Borax the Dragon, even he is not prepared for the mayhem that follows …the second in the series which started with KNIGHT SIR LOUIS AND THE DREADFUL DAMSEL!

The double-headed dragon Borax is causing fiery mischief across the land. The only hope of stopping the fiendish lizard is a long-lost, ancient Thingamabob (a talisman with watery powers.) Who will find it? Who will come to the rescue. Well, obviously, Knight Sir Louis and his chums Clunkie the robot horse, Pearlin the Wizentor, Mr Catalogue the talking boar, and Dave the sword with a hat.

The second in the series about Knight Sir Louis, readers will love returning to this bonkers world!

‘The Brothers McLeod…spin the fairy tale in a new direction, as if Hans Christian Andersen had cornered you in a pub and got his own yarn in the wrong order, or The Brothers Grimm had squeezed up next to you with a Tupperware box of home-made sandwiches on a long coach journey. Knight Sir Louis is an epic non-epic saga’ Stewart Lee, comedian

‘What a hero! What a story! Sublime daftness on every page.’ Jeremy Strong

Knight Sir Louis and the Dragon of Doooooom! SIGNED COPY - £6.99