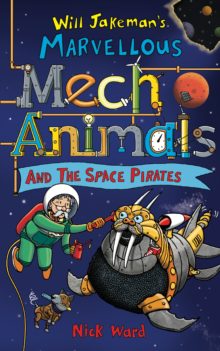 Will Jakeman, inventor of the world famous Marvellous Mechanimals, is back with a brand new adventure featuring merciless space pirates and a 12-year-old adventurer who goes by the name of … Charlie Small! (Watch out for his adventures coming soon!)

At the ripe old age of 99 and three quarters, Will Jakeman decides he must try to discover the whereabouts of the lost planet of his birth invaded by Reptoids, a gang of merciless Space Pirates, when he was still a little baby. Will builds a giant telescope that can see far out into the cosmos – but what he doesn’t realise is that his fiddling with the fabric of the cosmos causes a massive space-quake, and a twelve-year-old boy called Charlie Small is catapulted through the hole and lands near Will’s factory of inventions. The two embark on a series of adventures trying to get Charlie home – will they succeed or will they be left dangling in space forever?