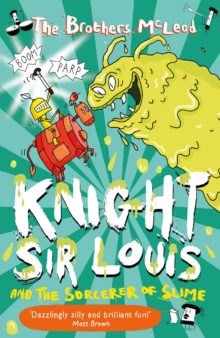 KNIGHT SIR LOUIS AND THE SORCERER OF SLIME

‘What a hero! What a story! Sublime daftness on every page.’ Jeremy Strong

‘The Brothers McLeod spin the fairy tale in a new direction, as if Hans Christian Andersen had cornered you in a pub and got his own yarn in the wrong order or The Brothers Grimm had squeezed up next to you with a Tupperware box of home-made sandwiches on a long coach journey. Knight Sir Louis is an epic non-epic saga’ Stewart Lee, comedian

King Burt the Not Bad is in a huff with his chief dragon-slayer, Knight Sir Louis. So when a stranger with piercing green eyes and a devastating smile arrives at Castle Sideways, King Burt is thrilled and demotes Louis to chief cleaner. But Louis is suspicious about the stranger, Squire Lyme, with his charming compliments and endless supply of green gummies … with the help of his friends Reader Catalogue, Pearlin, his haiku-loving steed, Clunkalot as well as a few ogres and gnomes, our hero determines to get to the slimybottom of things …can Louis’ calm courage once again save the day?

Perfect for readers who love Tom Gates, Bunny Vs Monkey and Julius Zebra!

KNIGHT SIR LOUIS AND THE SORCERER OF SLIME - £6.99